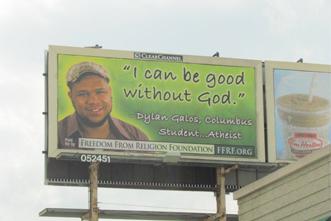 As reported by The Christian Post, an atheist group engaged in a campaign to convince Americans that they can be “good without God” accidentally placed one of its billboards on a church’s property. Rev. Waymon Malone of Christ Cathedral Church in Columbus, Ohio was outraged to find a billboard erected on his church’s land with the image of a young man promoting the atheist group’s efforts at “encouraging social acceptance of nonbelievers.” Malone could not be reached for comment on the story, but the Freedom From Religion Foundation says they had no idea the billboard had been built on church land. Annie Laurie Gaylor, FFRF co-President, remarked, “The action of this censorious church shows exactly why our campaign, intended to encourage social acceptance of non-believers, is so important. Do its deacons really believe one can’t be good without God?” FFRF calls themselves “an national organization of freethinkers” claims more than 16,500 members throughout the U.S.