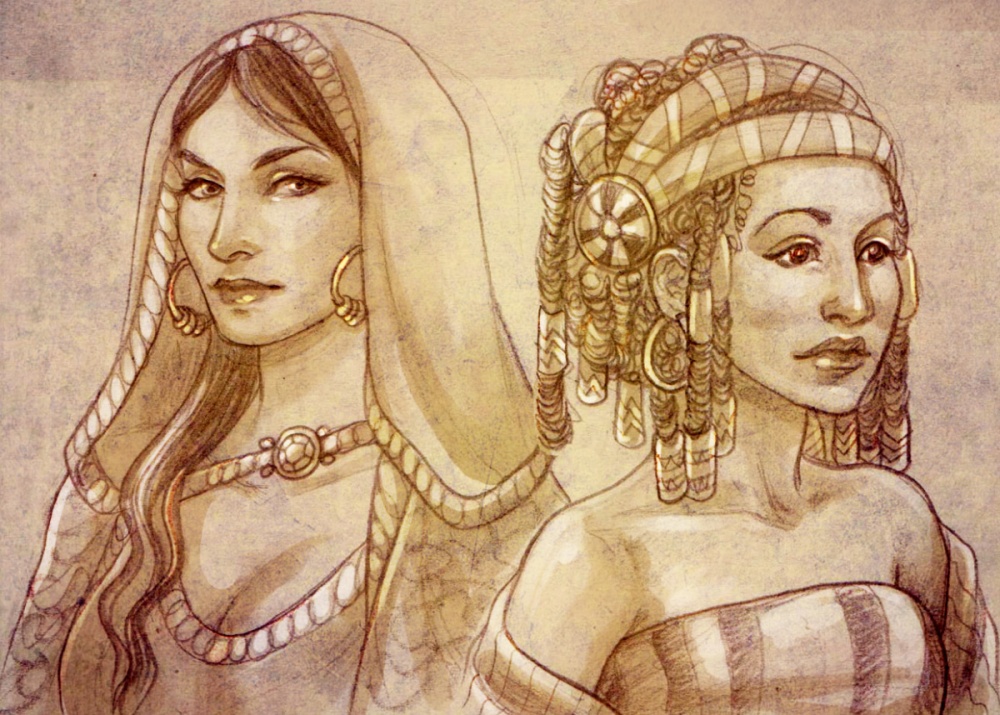 The Egyptian handmaid Hagar carry’s a certain stigma about her persona as someone who is fleeing the scene of the first ever recorded biblical instance of domestic strife. Sarai deals harshly with her (Gen. 16:6), constantly nagging, pointing the finger which causes Hagar to feel ostracized and run away. Though Hagar became disrespectful towards Sarai during her pregnancy, which she was given no option, feelings of frustration arise and her natural tendency at that moment is to retreat into the distance and find refuge back in Egypt. Hagar’s defiant will doesn’t help her cause to the path of freedom from slavery but only gracefully intensifies the promise that would soon be presented through her child. The racial and gender makeup of Hagar can’t be overlooked but the reasoning behind her flight stems from a response issue and not just from a race or gender-related issue. The Sovereignty of God is revealed to anyone willing to afford it an opportunity and if it had not been for the misrepresentation of it from Abram and Sarai to Hagar, then God probably wouldn’t have had to intervene.

In her article, Just a Sister Away, Renita Weems takes the story of Hagar from a cultural standpoint as a black woman who suffers discrimination at the hands of her masters. According to Genesis 16:6, we see a parallel to the Exodus story of Israel in Egypt. The Egyptians are the oppressors towards the Hebrew people who God told Abram would occur (Gen. 15:13) and now the roles are reversed as a matriarch of Israel is oppressing an Egyptian. Relationships across racial lines among women today are undeniable as Weems states and demonstrate the hatred behind the issue of justice for all.[1]

Hagar seeks an alternative way to freedom from this hatred by running back to bondage to native Egypt when she is confronted by an angel of the Lord. This is the first time in scripture in which the reference is made to the angel of the Lord and its first encounter is with someone who is considered an outsider to the nation of Israel. As Sarai makes reference to Hagar as her servant, we see in Genesis 16:8 that she is called by her name and as Sarai’s maid. Hagar is identified not as Abrams wife which is a direct indication that no special privilege would be afforded to her that the grace of God could not satisfy. Disparities can be seen, as Weems remarks, in the economic positions and ethnic identity between Sarai and Hagar that can divide relationships.[2]This, however, doesn’t concern the omnipotent one and the condition to receiving freedom is made possible through the submission to the voice of God. The angel of the Lord commands Hagar to return and submit to Sarai (Gen.16:9) which means submitting back to her control and authority, back to slavery or possibly death for running away. Josephus defends the idea that God told Hagar to return to Sarah after she suffered abuse at her hands by claiming that such a return would teach Hagar self-control.[3]Freedom always comes at a cost but must be initiated by faith and a willing obedience to the divine command and promise of God. Hagar gives verbal and vital expressions to her faith by calling the name of the Lord (Gen.16:13) and returning back to her master (Gen.16:15-16). The action she takes is far from passive as Weems claims but rather is a sheer reminder that freedom from slavery must be confronted in order to receive the promise.[4]

The exegesis found in Genesis 21 compares to that of Paul’s letter to the Galatians in chapter four that provides a spiritual allegory between Hagar and Ishmael as children of Mt. Sinai to Sarah and Isaac as heirs of Mt. Zion.[5]The expulsion of Hagar and Ishmael was preordained by God and couldn’t be thwarted as Weems disagrees on this point that Sarah’s words may have made a difference in the story. Hagar is seen here in a different light as compared to chapter 16 of Genesis when she is disdainfully proud. Now she exhibits a more passivity in her character and as Weems states participates in her own exploitation. This can be because of the theophany she experienced while running away the first time. Sarah’s witnesses the mockery from Ishmael towards Isaac and is immediately enraged. Some modern translations would assume that this simple playing angered Sarah because of the child’s associating with another child of a lower social class.[6]This thinking parallels to Weems ideas of class stratification that causes a division with women and can be passed down to their children as in the case of Isaac and Ishmael. What turned into a friendly game ends up in the sending away of Hagar that visibly made Abraham upset but was confirmed by God (Gen.21:12) that he should continue with the banishment.

The freedom that Hagar would experience in wandering the wilderness seems far-fetched given her condition and hopelessness. She would feel freedom fading from her fingertips as her provisions began to dissipate along with any hope of rescue. For the second time, we find Hagar leaving the scene but this time without her child. Ishmael is placed under the shade of some shrub, alone to die but not without the earlier promise made by God (Gen.16:12) yet to be fulfilled. Hagar, by casting out her son, could not visualize that she was treating Ishmael as Abraham treated her.[7]Also, we see a parallelism in the way she places Ishmael under a bush and how Abraham provided food and water for her journey in the desert. She feels powerless and ill-equipped as a mother to support her child and a direct alienation from trusting God. As Weems points out, “our estrangement from one another continues to compromise the integrity of our witness as God-fearing women.”[8]Hagar voices her concerns out loud, but it was the lad’s cries that God heard. As Goldingay states, relationship with this God is based on a trust in God’s promises and on following where God directs; there is no list of detailed rules to obey.[9]

The story of Hagar and Ishmael can be perceived as a story of a runaway slave women who is forced into a family that resents, discriminates and distrust her due to her racial background or economic status. But there is more to the surface of the story than we can gather from. The price of freedom requires an abandonment of self and a relationship to God. Running away from the promise will only delay the inevitable and in some way Weems is correct in saying that we are all Hagar’s daughters. In some way, we have taken to flight some of the very promises outlined by our covenant agreement to follow Christ when we allow sin and distraction to sidetrack our path to freedom. God reappears to Hagar a second time to reassure her of the promise made in their first encounter. Hagar could not see the well nearby and needed God to open her eyes. At times we have been given a promise that may not be visible but once we allow His grace to settle in our hearts the wellspring of living water may be our portion to a freedom found only in Christ. As a result, the child grows and with it, the promise of life and posterity are afforded to Hagar and her descendants for generations to come.

[1]Weems, Renita J. Just a Sister Away: A Womanist Vision of Women’s Relationships in the Bible. Philadelphia: Innisfree Press, 1988, 2.

[2]Weems, Renita J. Just a Sister Away: A Womanist Vision of Women’s Relationships in the Bible. Philadelphia: Innisfree Press, 1988, 3.

[4]Weems, Renita J. Just a Sister Away: A Womanist Vision of Women’s Relationships in the Bible. Philadelphia: Innisfree Press, 1988, 12.

[8]Weems, Renita J. Just a Sister Away: A Womanist Vision of Women’s Relationships in the Bible. Philadelphia: Innisfree Press, 1988, 18.